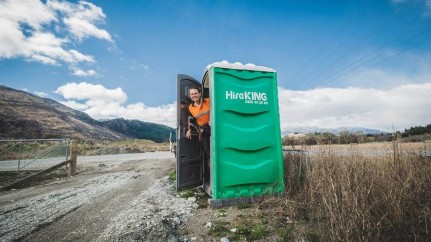 Queenstown building apprentice Chelsea Roper has been advocating for sanitary bins in portaloos.

If Chelsea Roper​ worked in an office she would not have to worry about where to put used tampons, but portaloos on construction sites were not built with women in mind.

Roper, an apprentice builder in Queenstown, was busy finding ways to dispose of sanitary products when she realised others were facing the same issue. “It’s unfair. [Having a period] is not something we have a choice about,” she said. She approached HireKing – a company that provides about 1000 portaloos at construction sites across the South Island – with the dilemma. “I thought I might as well ask the company because, to be honest, it’s not something men are going to think about.”

HireKing general manager Fabian Kulpe said it was the first time he was aware of the issue being raised, but with more women moving into traditionally “blokey” trades such as construction, it was important. Other businesses such as offices and restaurants were required to provide disposal facilities for sanitary items, but with few women on construction sites it had never been deemed necessary in portaloos, he said.