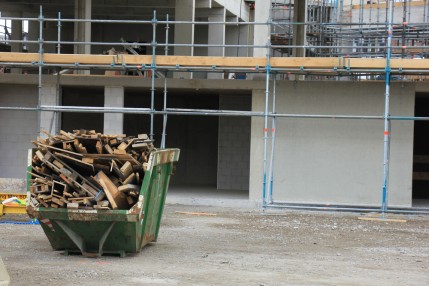 More than 43,000 new houses and apartments have been consented in the year to May, but with that record comes a shocking problem most people are unaware of. They produce hundreds of thousands of tonnes of waste – and the more houses built, the bigger the problem gets. Every new house build produces about 4.5 tonnes of waste – it would take 30 years for a household to put its kerbside bin out once a week to generate the same waste.

In a brand-new street in Flat Bush, south-east Auckland, the building boom is in full force and the ugly side effects hit you in the face. Several houses are under construction, there is no rubbish skip in sight, security fencing is missing, and chip packets and other lunch debris blows across the road. Sheets of soft plastic have been dumped along with timber offcuts, chunks of concrete, and polystyrene insulation. Add to that, lunch residue such as empty plastic drink bottles and banana skins, and the street is an eyesore.

Under a pilot scheme funded by the local board, staff from contractor Wilkinson Environmental visit building sites in Flat Bush daily talking to workers and managers about how to deal with construction waste. The scheme may be replicated in other suburbs.