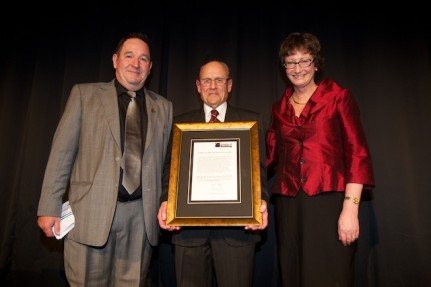 Bob Lockwood (centre) receiving the award of NZIOB Honorary Member in 2010. On Bob’s left is Martin Fahey (NZIOB President 2009-2011) and on his right, Katrina Bach (CEO of the Department of Building and Housing).

R S Lockwood (Bob), a central figure within the New Zealand construction industry across three decades, passed away earlier this month. The level of industry service that Bob provided was extensive. For the NZIOB, Bob served as our first President in 1983, though his interest in establishing the NZIOB’s predecessor, a New Zealand Branch of the Australian Institute of Building (AIB), went back further. As Jim Espie recalls “Bob was aware of my membership of the AIB from 1957 and of my keenness to see a branch established in New Zealand. He did everything he could to help achieve this. In due course, he was President of the Foundation Council of the NZIOB (elected 1983) and he was then elected President of the NZIOB at the first AGM held in 1984.”

Between those two bookends (1957 and 1983), Bob was a construction industry dynamo. His industry service highlights include:

*BIAC was set-up by government to advise on issues affecting the industry. It went through several incarnations over the subsequent 30 years, the last being the Department of Building and Housing.

Running in parallel with the above industry service, Bob was the Managing Director of commercial builder, McMillan & Lockwood, a North Island firm head-quartered in Palmerston North.

An editorial titled Troubled Times, Strong Leader featured in the March 1968 edition of industry journal Construction. The article summarised Bob’s recently completed year as NZIBF President, and in doing so provided a nice snapshot of the high regard in which the industry held him:

“Study carefully the masterly review of the past twelve months given to the Federation’s annual conference in Palmerston North by the outgoing president, Mr R S Lockwood. In his usual forthright and highly competent manner, Mr Lockwood set the record straight, as it affects the construction industry of this country and then went on constructively to give a blueprint for future development.”

Outside of industry association accolades, Bob received the following honours for his contribution to the New Zealand construction industry:

The NZIOB was represented at Bob Lockwood’s funeral by CEO, Malcolm Fleming and NZIOB Past President, Gina Jones.

Acknowledgments to Jim Espie, BRANZ, and RMBA for assisting in the compiling of Bob Lockwood’s significant industry service record.