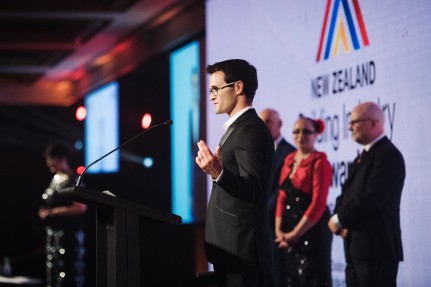 There were six finalists in the BCITO Young Achiever category:

One Highly Commended and two Excellence awards were presented in this category.

The Highly Commended award was presented to Tom Ranier from Construction Workshop in Christchurch. Tom began his career in construction in 2012. An early achievement was helping complete the demolition of a 25,000 square metre Lincoln University building. Tom ensured that this work didn’t disrupt the University during exams. He also saved the client $1 Million by obtaining consents that allowed materials to be deposited in an abandoned quarry. The judges noted that Tom has delivered projects across numerous sectors, always being pro-active, resolving problems, and ensuring successful outcomes.

The first Excellence award was presented to Ashleigh Hunter from Designgroup Stapleton Elliott in Palmerston North. Ashleigh is a Registered Landscape Architect, beginning her career in 2016. She has worked alongside architects on a wide range of projects, focusing on the landscape design component and building the DGSE Landscape team from scratch. The judges said Ashleigh has the ability and skill to enhance and integrate architectural concepts, which ultimately result in a cohesive design response for the client.

Rhys Mackenzie of Hawkins in Auckland was awarded Excellence for his role as Project Manager. Rhys was also the Category Winner. Rhys started in construction as a labourer on the Northland Region Corrections Facility project for Arrow. He impressed his manager, who encouraged Rhys to undertake a construction cadetship. Rhys subsequently delivered several projects for Corrections, leading site teams on complex projects, and now runs a $100 Million project. The judges said Rhys has the qualities necessary to build on the success he has achieved to date and is an exceptional candidate for the Young Achiever Award.

A few words from Rhys…

I'm so grateful for the opportunities I've had that have led to me becoming a Project Manager at Hawkins. Being acknowledged by my peers and the industry at the NZIOB Awards has been hugely humbling. Big thanks to my project team, my Hawkins colleagues, and mentors over the years for your support.