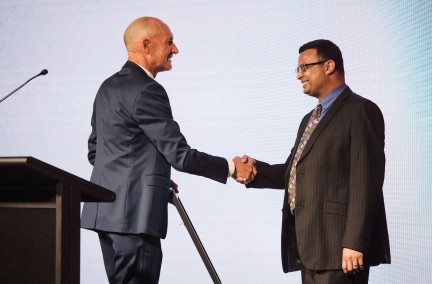 The first award of the evening, the prestigious NZIOB Medal, was awarded to Samir Govind for his commitment to the on-going evolution of the Institute, and for being an influential and respected presence in the New Zealand building industry.

Amongst Samir’s achievements as the NZIOB National President, he oversaw the introduction of events that are now part of the Institute’s annual programme. These include NZIOB-hosted conferences and the Christchurch-based Golf Day, the latter being an event he personally directed for several years after its development. Following his tenure on the NZIOB National Council, he has maintained close active involvement with the Institute, including as a Trustee of the NZIOB Charitable Trust (2016-) and as a member of the Rules Committee that developed the new NZIOB Constitution (2017-2019).

A few words from Samir…

Thank you to our current NZIOB board and the National Office team. It is awesome to be acknowledged by industry peers for my sustained contribution and leadership in our building industry. It is pleasing to see that some of the initiatives that were created as part of my tenure on the Southern Chapter and National Council are still relevant and are enjoyed by the industry. As I said in my speech on the night, I would also like to thank Graeme Goss FNZIOB from Canterbury, one of the original foundation members, who gave me mentorship, support and guidance through my early years with NZIOB.