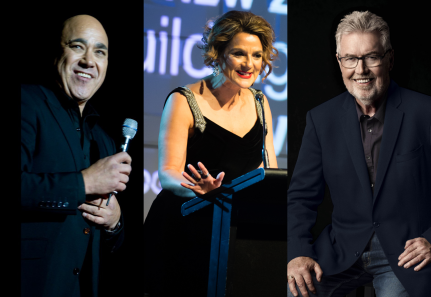 We are delighted to announce our three MCs for the three venues hosting the New Zealand Building Industry Awards Ceremony and Gala Dinner are Jackie Clarke (Auckland), Frankie Stevens (Wellington), and Phil Gifford (Christchurch). Having such high-caliber professional entertainers to guide us through the new-format Awards ceremony is testament to what an auspicious night this is for the construction industry.

Those who have been lucky enough to attend one of the last two Awards Ceremonies will recall what a stellar job Jackie Clarke does as MC. She’s has been captivating audiences for over 35 years and was recognised with an MNZM for services to the industry on the Queen’s Birthday Honours List 2018. Jackie will be our Master MC, running the show from the Cordis Hotel in Auckland.

Our Wellington-based MC will be Frankie Stevens, a New Zealand entertainment icon. His career highlights include touring as a singer with Sammy Davis Jnr and Shirley Bassey (to name a couple), television appearances on Hawaii Five 0 and as a judge on New Zealand Idol, and film appearances in Matrix 2. In 2005 Frankie was made a Member of the New Zealand Order of Merit for services to entertainment.

And our Christchurch attendees will have the pleasure of enjoying Phil Gifford’s outstanding humour and intellect as he ushers them through the Awards evening. A true media guru, Phil’s career ranges from reporting on every World Rugby Cup, to meeting Mick Jagger and Dolly Parton, to writing Dame Valerie Adams’ biography, to dancing with Dame Edna Everage, to co-writing the script for the Billy T James film “Te Movie”, to ghost writing for Sir Peter Snell.

Awards entries are closing soon! There is still one more week left to get your entries in. Visit the Awards website for information on how to enter, or call (04) 282 1484 to chat to someone about your entry. Entries close at 5pm on 24 July.