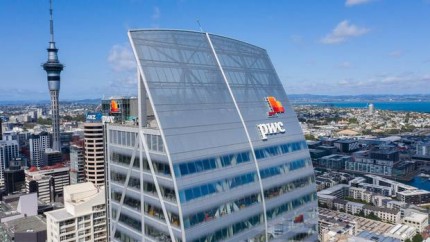 New Zealand’s tallest office building, the PwC Tower on Auckland’s downtown waterfront, opened for business earlier this week, after eight years in planning and construction. Standing about 180 metres tall, the 39-level steel and glass tower offers 39,000 square metres of Auckland’s premium office space. It also boasts the country’s fastest lifts, travelling at 8 metres a second. The tower is at the heart of the $1 billion Commercial Bay office and retail development officially opened by Prime Minister Jacinda Ardern on 11 June. Two railway tunnels and three basement carparking tunnels sit underneath it below sea level, plus three levels of retail and the 39-level office tower – connected with four other buildings – made it a seriously challenging project.