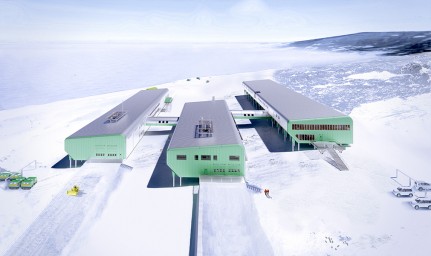 The redevelopment of Scott Base, New Zealand’s home in Antarctica, is the largest and most complex project ever undertaken by Antarctica New Zealand. The ultimate ‘Built to Last’ case study, this conference session will examine the core topics of resilience, technology and wellbeing in what is arguably the harshest environment in the world. Watch the fly around video of the site and buildings

Simon Shelton was born as close as safely possible to Scott Base in Invercargill, he then grew up in the Antarctic gateway city of Christchurch. Needless to say, this naturally led him to a career with Antarctica New Zealand beginning in 2011. Simon has led the Scott Base Redevelopment project team from the initiation of the project in 2016. Prior to this, as Project Manager, he successfully delivered the $6.3m upgrades to the Hillary Field Centre at Scott Base. Simon has wintered at Scott Base twice, once as the Scott Base Winter Leader and Field Support, and in 2015 as Project Manager. Before working for Antarctica New Zealand, Simon worked on commercial, industrial and humanitarian projects in Australia, Afghanistan, India and New Zealand, following his passion for remote and challenging projects. He enjoys leading teams, environmental stewardship and science.

Euan has been a Principal at Jasmax since 2004. He leads a skilled design team that specialise in the health and education sector. Euan’s substantial base of international experience covers London, Portugal, Dubai and South Africa; yet since joining Jasmax in 1996, New Zealand is now where Euan has built his largest and most accomplished body of credits. Together with his highly skilled team, Euan has the invaluable ability to overcome inherent complexities within projects, most recently exhibited in the CDHB Burwood Health Campus. His aptitude for design and his natural communication skills lead him to take an active part in management across the company. He actively fosters emerging design talent, plays a pivotal role in client interaction, and engages with the wider architecture industry.

From its inception in 1995, Anthony has led Leighs Construction to become a highly successful and well-respected national commercial construction company. Anthony leads a team that operate within a culture focused on the successful completion of challenging construction projects and values of pride, passion and excellence. Leighs completes a wide range of vertical and social infrastructure projects for the NZ Government such as hospitals, prisons, and education and research facilities. An adventurous spirit, along with an ability to embrace challenges and innovation, contributed to Leighs Construction being the first construction company to build for the New Zealand Government in Antarctica, with the construction of the Hillary Field Centre at New Zealand’s Scott Base in 2004. Leighs Construction has completed all the other major construction projects at Scott Base since, including additions and alterations to the main base, remote location laboratories and the wind turbine foundations.

Don’t be left out in the cold! Book your in-person or virtual ticket now.