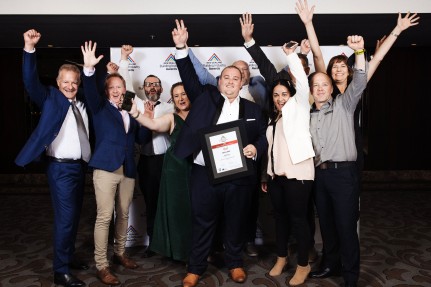 The 2020 edition of the NZIOB’s annual awards night was unlike any of the Institute’s previous 26 annual awards gala dinners. Due to COVID-19, the evening programme was held simultaneously across three venues (Cordis, Auckland; Te Papa, Wellington; Christchurch Townhall), as well as being live-streamed for free.

The event itself went off without any technical hitches, with Auckland MC, Jackie Clarke setting the scene by starting off both halves of the night with two powerful singing displays. While Jackie cut to the Wellington and Christchurch MCs regularly through the awards ceremony itself, Te Papa and Christchurch Town Hall attendees were entertained by their own ‘star’ MCs and jazz bands during the pre-dinner drinks period and the dinner service. A highlight for the Wellington audience was MC Frankie Stevens deciding to cut the jazz band’s set by twenty minutes, taking over the entertainment role to deliver a burst of Kiwi classics that had the crowd up and dancing.

Feedback from attendees across the country was that this was the NZIOB’s best awards night yet, an example of an innovative approach, well supported by both entries (a new record for number of entries received) and attendance at the gala dinner (up by over 20%). Though the move to hold the 2020 New Zealand Building Industry Awards across three venues was driven by COVID-19 uncertainties, the generation of a larger audience, and taking the occasion of the gala dinner outside of Auckland, provided considerable benefits for both the companies who entered their people into the awards and those who just wanted to come together as an industry to celebrate and network – something there hasn’t been too much of in 2020.

In terms of the awards themselves, the key takeaways from reviewing this year’s entries, included: Building Information Modelling (BIM), a technology that the NZIOB has been a leading promoter of, has become a standard tool for designing and delivering commercial construction projects; there is no shortage of creativity being applied on our country’s building sites; and the construction industry provides incredible opportunities for our young people. As an example of the latter, is that both this year’s Young Achiever and Supreme Award winners, at under 30 and 35 years of age respectively, are responsible for delivering $100 Million + construction projects.

Watch a recording of the ceremony